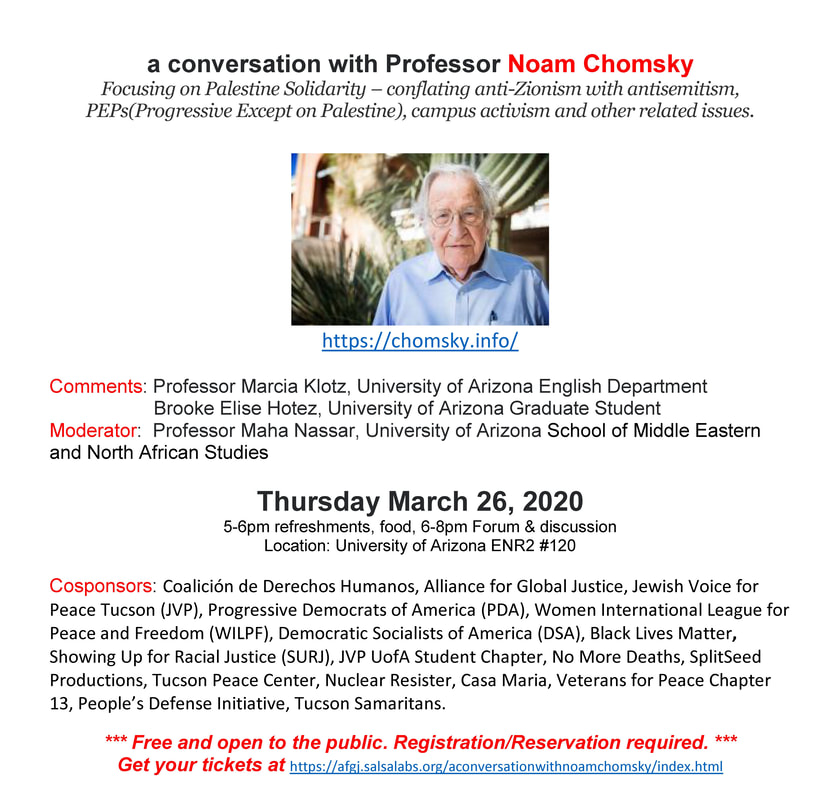 Get your tickets to A Conversation with Professor Chomsky at ​
https://afgj.salsalabs.org/aconversationwithnoamchomsky/index.html

The International Center for Peace and Justice and Most Holy Trinity Parish
present
The BDS Movement (Boycott, Divestment and Sanctions against Israel)
In 2005, Palestinian civil society initiated a campaign of boycotts, divestment and sanctions as a new method in the struggle against the Israeli occupation. BDS is now an international movement with support and opposition everywhere including here in Tucson and Southern Arizona. ICPJ is proud to provide this opportunity to our community to learn about BDS and hear opposing but informative views about it.

On Sunday April 3, 2016 please join us in an educational afternoon in 3 parts:

We visited two surveillance towers built by the Israeli company Elbit Systems, close to the Arizona / Mexico border. These are part of a 7-tower trial project. Elbit builds the towers used on the walls and all over the West Bank. The first tower we went to was a bit downhill from a mobile surveillance system mounted on a Border Patrol truck, which we have seen in use in various places. Why it was right next to a surveillance tower was not clear. A Border Patrol agent came riding up on an ATV, he was the "good cop", followed somewhat later by someone who emerged from the surveillance vehicle, and two other BP trucks. The other BP agents were not as friendly as the first one.
Notice the teddy bear on the front of the ATV, he found it in the desert. But he had no idea what had happened to the child it had belonged to.
Also note the jaguar on the big banner: two members of the Tohono Od'ham Nation are part of our coalition, and one of them contributed the jaguar.

Slide Show of our trip to Elbit Systems towers